"Memento Mori": The Reminder We All Desperately Need

“Let us prepare our minds as if we’d come to the very end of life. Let us postpone nothing. Let us balance life’s books each day. … The one who puts the finishing touches on their life each day is never short of time.” Seneca

At a Roman triumph, the majority of the public would have their eyes glued to the victorious general at the front—one of the most coveted spots during Roman times. Only a few would notice the aide in the back, right behind the commander, whispering into his ear, “Remember, thou art mortal.” What a reminder to hear at the peak of glory and victory!

It is reminders like this one that we desperately need in our own lives—a thought or an idea that we’d rather ignore, do everything to avoid and pretend is not true. Most often, our ego runs away from anything that reminds us of the reality that sits at odds with the comfortable narrative we have build for ourselves. Or, we are simply petrified to look at life’s facts as they are. And there is one simple fact that most of us are utterly scared to meditate, reflect on and face head on: We are going to die. Everyone around us is going to die.

Such reminders and exercises take part of Memento Mori—the ancient practice of reflection on mortality that goes back to Socrates, who said that the proper practice of philosophy is “about nothing else but dying and being dead.” In early Buddhist texts, a prominent term is maraṇasati, which translates as ‘remember death.’ Some Sufis have been called the “people of the graves,” because of their practice of frequenting graveyards to ponder on death and one’s mortality.

Throughout history, Memento Mori reminders have come in many forms. Some, like the aide behind the general, were there to humble. Others were invented to inspire zest for life. The essayist Michel de Montaigne, for instance, was fond of an ancient Egyptian custom where during times of festivities, a skeleton would be brought out with people cheering “Drink and be merry for when you’re dead you will look like this.”

To us moderns this sounds like an awful idea. Who wants to think about death? But what if instead of being scared and unwilling to embrace this truth we did the opposite? What if reflecting and meditating on that fact was a simple key to living life to the fullest? Or that it was the key to our freedom—as Montaigne put it, “To practice death is to practice freedom. A man who has learned how to die has unlearned how to be a slave.”

In his Meditations—essentially his own private journal—Marcus Aurelius wrote that “You could leave life right now. Let that determine what you do and say and think.” That was a personal reminder to continue living a life of virtue NOW, and not wait. The French painter Philippe de Champaigne expressed a similar sentiment in his painting Still Life with a Skull, which showed the three essentials of existence — the tulip (life), the skull (death), and the hourglass (time). The original painting is part of a genre referred to as Vanitas, a form of 17th century artwork featuring symbols of mortality which encourage reflection on the meaning and fleetingness of life.

Meditating on your mortality is only depressing if you miss the point. It is in fact a tool to create priority and meaning. It’s a tool that generations have used to create real perspective and urgency. To treat our time as a gift and not waste it on the trivial and vain. Death doesn’t make life pointless but rather purposeful. And fortunately, we don’t have to nearly die to tap into this. A simple reminder can bring us closer to living the life we want. It doesn’t matter who you are or how many things you have left to be done, a car can hit you in an intersection and drive your teeth back into your skull. That’s it. It could all be over. Today, tomorrow, someday soon.

The Stoic finds this thought invigorating and humbling. It is not surprising that one of Seneca’s biographies is titled Dying Every Day. After all, it is Seneca who urged us to tell ourselves “You may not wake up tomorrow,” when going to bed and “You may not sleep again,” when waking up as reminders of our mortality. Or as another Stoic, Epictetus, urged his students: “Keep death and exile before your eyes each day, along with everything that seems terrible— by doing so, you’ll never have a base thought nor will you have excessive desire.” Use those reminders and meditate on them daily—let them be the building blocks of living your life to the fullest and not wasting a second.

We are excited to announce that the Daily Stoic is now releasing its own Memento Mori—”remember that you will die”—medallion as a physical manifestation for you to carry with everywhere. 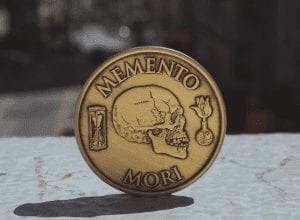 Each coin is handcrafted in the United States by a custom mint operating in Minnesota since 1882. The same mint where the iconic AA anniversary medallions were created in 1973 by Bill Westman, an employee. Westman wanted to create something to leave with people he interacted with in recovery groups and to mark their achievements in sobriety. To remind them of the messages of AA and help keep them on their road to recovery. Westman’s advice was “carry this in your pocket or purse and when temptation is great, reach into your pocket and feel the medallion and remember your struggle to get this far.”

Learn more and purchase your own memento mori medallion by clicking here.

Memento Mori Tattoos & Inspiration – We reached out to readers to find out how they are remembering mortality through permanent body ink. Below is a collection of some Memento Mori tattoos and the stories behind them.

History of Memento Mori – In this article, we’ll explore the history of this seemingly haunting, but actually inspiring, phrase as well as where it came from and what it means. We’ll show you how it has evolved through its many forms of practice and interpretation in literature, art, fashion, and present day popular culture