Who Are You Spending Time With?

There was a proverb in the ancient world: “If you dwell with a lame man, you will learn how to limp.” It’s a pretty observable truth. We become like the people we spend the most time with. That’s why we have to be so careful about the influences we allow into our life.

But that idea of dwelling with a lame man cuts both ways. Epictetus was famously “lame,” having had his leg crippled while in slavery. Marcus Aurelius spent enormous amounts of time with Epictetus’s writings. It didn’t make him limp—it made him wiser, more resilient, calmer, more compassionate. Epictetus passed those things onto him. A slave shaped a king and made him better.

“Through philosophy and in the company of philosophy,” Plutarch writes, “it is possible to attain the knowledge of what is honorable and what is shameful, what is just and what is unjust, what, in brief, is to be chosen and what it is to be avoided.” That’s what we’re all trying to do, isn’t it? That’s what Panaetius was trying to do with his “Scipionic Circle,” which met in the great house of Athens and Rome to discuss philosophy, share ideas and explore Stoicism. That’s why we’re studying the philosophy two thousand years later, reading these books, talking to each other, writing in our journals or even for an audience. To become better. To learn what must be learned. To be exposed to and inspired by the wisest minds who have ever lived. To be held accountable by them, too. To become like them—or at least a little bit more like them.

If you want to spend time with more dedicated Stoics and take your study of the philosophy to the next level, we’d like to invite you to check out our Daily Stoic Life program. It’s our own version of the Scipionic Circle. Some folks pursue philosophy and self-improvement as a side project. But some treat it seriously, they want to go deep, and they know that the best way to learn is to surround themselves with like-minded individuals and people who will push them. Improvement comes fastest through improvement, results through accountability and wisdom through exposure to new people and new ideas. Would Marcus Aurelius have become Marcus Aurelius without the advice of Rusticus? Would Seneca have been Seneca without his discussions with Lucillius? Like Plutarch said, by keeping company with fellow philosophers,we are able to become better people, better leaders, better thinkers.

For far less than the tuition to even one “Intro to Philosophy” class, as a member of Daily Stoic Life, you’ll receive daily practical advice, tried and tested over centuries. The advice is designed to help you handle stress, adversity, anger, moral dilemmas, anxiety, fear, failure, and many other of the difficulties we encounter as men and women of the world. 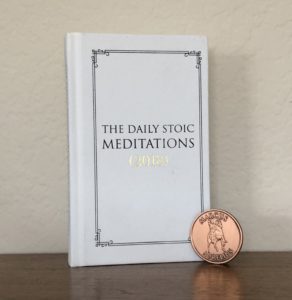 P.S. This was originally sent on October 25, 2020. Sign up today for the Daily Stoic’s email and get our popular free 7-day course on Stoicism.