If you’ve served in the Military, Law Enforcement, or in any government agency, you’ve probably seen challenge coins passed around. Historically, a challenge coin holds the emblem or insignia of a specific group and is carried by that group’s members. Roman Legionnaires, military personnel and private sector companies have all used challenge coins to show membership and achievement within their ranks. This article will focus on the history of handing out such coins, and how we still benefit from the practice today. 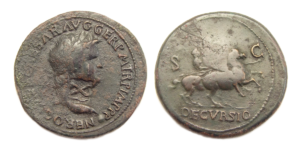 The exact origin story of the challenge coin has been widely debated by military historians, though the first traces of them date back to the Roman Empire. If a soldier performed well in battle, he would receive his typical day’s pay and a separate coin as a bonus. Some accounts say that these coins were specially stamped with a mark of the legion from which it came, prompting some men to hold on to their coins as a memento of their service. Certainly, the coins that were received by Roman Legionnaires were the earliest form of challenge coins that we know of. However, a popular story told in U.S. military circles suggests that the first “official” challenge coin wasn’t created until WWI.

The story goes that a wealthy American lieutenant in World War I distributed matching bronze coins to his unit members before they were deployed. After an American pilot was captured by Germans, the pilot managed to escape to a French outpost. Unaware of who the American was and with no way to verify his identity, the French assumed him to be a German spy. In response to these accusations, the American presented the challenge coin around his neck. According to the tale, one of the French soldiers who was holding him captive recognized the insignia stamped on the coin. This not only saved the pilot’s life, but also earned him a bottle of French wine for his troubles.

Where Does The “Challenge” Part Come From? 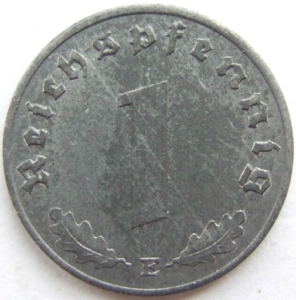 Another story insists that the “challenge” aspect of the coins began in Germany after World War II. Americans stationed there adopted a local tradition of conducting “pfennig checks.” The pfennig was the lowest monetary coin in Germany, and if you didn’t have one when a “Coin Check” was called, you were stuck buying drinks for everyone. This tradition evolved from a pfennig to a unit’s unique medallion, and members would “challenge” each other by slamming a medallion down on the bar. If any member present didn’t have his medallion, he had to buy a drink for the challenger and for anyone else that had their coin. Reciprocally, if all the other members had their medallions, the challenger had to then buy everyone drinks. Other military historians believe the tradition began in a bar in Vietnam, where patrons were required to present enemy bullets or their challenge coin upon entering.

Interestingly, there were many notable challenge coins to come out of the Vietnam war, including the 1st Special Forces Group (Airborne) coin. During the Vietnam War, U.S. special operations forces were working with the Central Intelligence Agency (CIA) in conducting clandestine operations against the North Vietnamese Army and Viet Cong. Due to the secrecy of such operations, U.S. soldiers were not overtly commended for their bravery and accomplishments during these missions. In response, the leadership of the 1st Special Forces Group (Airborne) designed a military challenge coin to present to their men. On the front was the unit’s name, a beret with the number one in the top right and a sword pointing up, signifying the unit was ready for combat. On the reverse side was the Special Forces motto De Oppresso Liber, or “Free the Oppressed”.

Today, the challenge coin tradition has spread far beyond the ranks of the military. Law enforcement agencies hand them out to commemorate notable cases or occurrences. Government agencies and even private-sector corporations have adopted the practice to recognize their employees. 12-step groups also hand them out to mark stints of sobriety.

Since the Clinton administration, every president has had his own challenge coin. And since Dick Cheney served as vice president, every vice president has their own unique coin as well. There are usually several different Presidential coins. There’s one for the inauguration, one that commemorates the administration, and one available to the general public. The rarest coin can only be handed out by the president. These are usually reserved for special occasions. It’s said that George W. Bush reserved his coins for injured soldiers coming back from war. President Obama handed them out fairly often, usually to soldiers that guard the stairs on Air Force One.

As you can imagine, challenge coins are now widely traded and collected by a myriad of people. Some collect coins that highlight what they’ve done in their career. Others keep coins in their pockets to remind them of their sobriety and how far they’ve come. And now, we have challenge coins here at Daily Stoic to memorialize some of the most important Stoic concepts.

While the history of the challenge coin involves humorous examples of soldiers slamming coins on bar tables, the Stoics would have seen these coins with far more intrinsic purposes The skeptic Michel de Montaigne, who was undoubtedly influenced by the Stoics, saw the value of carrying a memento with him that reminded him of his philosophy. In 1576, Montaigne had his own personal medal created. He had it engraved with his age, the word “Epecho” , or “I abstain” in Greek, and another Sceptic motto in French: “Que sais-je?”: what do I know?

The coins we keep on our person now—ones that read Memento Mori, Premeditatio Malorum, or refer to the 4 virtues—they all remind us to be our best selves.  The Stoics saw life as the ultimate challenge, and the only way to overcome it is to master the way we see the world. Marcus Aurelius once said that life is more like wrestling than dancing, “in so far as it stands ready against the accidental and the unforeseen, and is not apt to fall”. By keeping our principles on our person, inscribed on coins, and with us wherever we go, all we have to do is reach in our pockets if we need a little encouragement to keep going.

Epictetus also spoke of life as a challenge and insisted that we seek to triumph despite these challenges, writing “The greater the difficulty, the more glory in surmounting it. Skillful sailors gain their reputation from storms and tempests.”

In business, in the military, in academics, and in life—we must always be willing to challenge ourselves. We have to stand ready like a wrestler, as Marcus says. Because life will continuously try to knock us down. And if we have nothing else to keep us on our feet, perhaps the coin in our pocket will be enough to bear the weight of whatever is hanging over us at that moment.

Below is a collection of our Daily Stoic challenge coins and the meaning behind them. Choose the ones that speak to you the most, or get one for each day of the week with our Daily Stoic Challenge Coin Bundle: 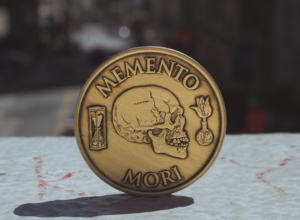 Our most popular medallion, memento mori (latin: ‘remember you must die’) is the ancient practice of reflecting on your own mortality.

The front features our interpretation of “Still Life with a Skull,” which showed the three essentials of existence – the tulip (life), the skull (death), and the hourglass (time). The back shows Marcus Aurelius’s timeless reminder ‘you could leave life right now.’

Meditating on your mortality is only depressing if you miss the point. It is in fact a tool to create priority and meaning. It’s a tool that generations have used to create real perspective and urgency. To treat our time as a gift and not waste it on the trivial and vain. Death doesn’t make life pointless but rather purposeful. 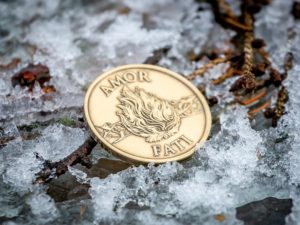 Amor fati is a mindset that you take on for making the best out of anything that happens: Treating each and every moment—no matter how challenging—as something to be embraced, not avoided. To not only be okay with it, but love it and be better for it. So that like oxygen to a fire, obstacles and adversity become fuel for your potential.

The flame on the front is inspired by Marcus Aurelius’s timeless wisdom: “a blazing fire makes flame and brightness out of everything that is thrown into it.” The back features an excerpt of the great philosopher Friedrich Nietzsche’s formula for greatness: “Not merely bear what is necessary, still less conceal it….but love it.” 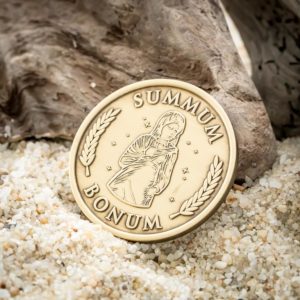 Summum Bonum is an expression from Cicero, Rome’s greatest orator. In Latin, it means “the highest good.”

And what is the highest good? What is it that we are supposed to be aiming for in this life? To the Stoics, the answer is virtue.

The from shows Arete was the goddess of virtue. The model for us to follow–the embodiment of this idea of doing and living right. The back shows Marcus’s simple reminder:

“Just that you do the right thing. The rest doesn’t matter.” 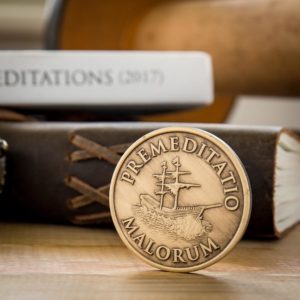 Premeditatio malorum (“the pre-meditation of evils”) is a Stoic exercise of imagining things that could go wrong or be taken away from us. It helps us prepare for life’s inevitable setbacks and develop resilience in the face of uncertainty.

The premeditatio malorum medallion is designed to keep us equally prepared–and strengthen us for any possibility. The back features part of Seneca’s quote “All the terms of our human lot should be before our eyes.” Wrapped around the border are the situations Seneca instructs us to rehearse: Exile. Torture. War. Shipwreck. 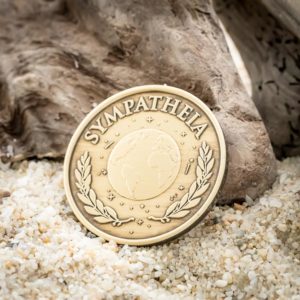 Perhaps the most radical idea in all of Stoicism: Sympatheia is the belief in mutual interdependence among everything in the universe, that we are all one.

The front shows the famous 1972 “Blue Marble” earth, which instantly changed man’s perspective on himself. It is a view Marcus Aurelius could only imagine but still understood. The image is a prompt to zoom out of your own bubble and see the world as a whole and understand the interdependence of everyone on it.

Obstacle Is The Way Medallion 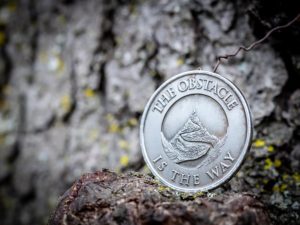 The inspiration for the international bestseller The Obstacle Is The Way by Ryan Holiday, that line, plucked from the pages of Marcus Aurelius’s private Meditations nearly 2000 years ago, is a timeless, life-changing lesson.

Now, with our newest medallion, you can carry this powerful truth with you wherever you go.

The front features a great mountain. The back shows Marcus’s enduring words:

“The impediment to action advances action, what stands in the way becomes the way.”

Ego Is The Enemy Medallion 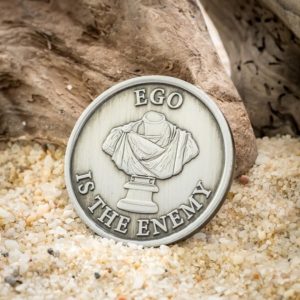 “Ego sucks us down like the law of gravity” – Cyril Connolly

The purpose of this coin is to remind us to be: 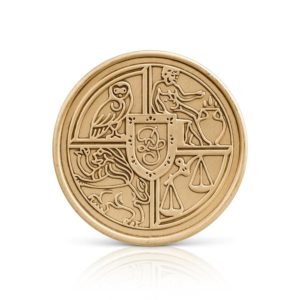 “If, at some point in your life, you should come across anything better than justice, truth, self-control, courage—it must be an extraordinary thing indeed.” —Marcus Aurelius

Daily Stoic is proud to announce the minting of our newest coin: the Four Virtues Medallion.

This medallion is a perfect reminder that you can have everything you want if you just make the effort to take the road that leads through virtue. The Four Virtues Medallion is designed to make that effort just a little bit easier. 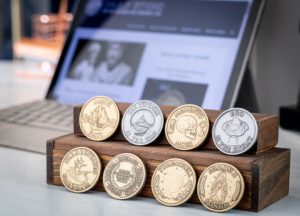