Who Is Gaius Rubellius Plautus? An Introduction To Nero's Rival

Gaius Rubellius Plautus was a Roman noble, Stoic philosopher, and best known for being the rival of the Roman Emperor Nero. Besides being a potential threat to Nero’s reign due to his parentage, he also associated with The Stoic Opposition, a group that opposed the rule of a few emperors in the 1st century AD.

He was born in 33 AD and executed by Nero in 62 AD. His family was executed a few years later, as part of Nero’s reign of terror.

Gaius Rubellius Plautus was born into nobility and into a position where his existence alone stood to threaten Nero. His father’s side was of relative unimportance compared to his mother’s—his father was the first of his family to join the Senate, but had not descended from anyone of note, while his mother, Julia, was the granddaughter of the Roman Emperor Tiberius. Julia was also related to other emperors through blood. Through Julia, Plautus was also related to the Julio-Claudian dynasty (which was founded by Augustus and lasted through Nero’s reign).

As a result of their parentage, Julia and Plautus had targets on their backs. Prior to Nero,  Empress Messalina (wife of Emperor Claudius) had plans for her son ascending to the throne—she feared both Nero and Plautus ascending and wanted her son to be emperor.

She tried sabotaging both, though Nero of course would become Emperor. In Plautus’s case, Messalina accused his mother, Julia, of incest and immorality and as a result, Messalina’s husband Claudius had her executed. Julia’s reputation was that she was a virtuous woman, and these accusations were likely unfounded. Furthermore, Messalina became known for lying and plotting to keep the emperorship secure for her own designs. Eventually Messalina herself was executed, and her interference stopped, but it was far too late to spare Julia.

We will go into Nero and his ilk’s transgressions against Plautus in a later section.

Plautus married Antista Pollitta, whose father was a senator and colleague of Nero. He had children, whose names are unknown. He had a reputation for being a good father and husband. Unfortunately, a few years after Plautus was executed, Nero would have his wife and children executed as well, ending Plautus’s familial legacy.

Rubellius Plautus was associated with a specific group of Stoics called The Stoic Opposition. They were philosophers that fought against the tyrannical power of emperors in the first century AD, specifically opposing Nero, then Vespasian, then Domitian. Rubellius Plautus only lived during Nero’s reign, as Nero would later order him killed.

The Stoic Opposition essentially wanted to move away from random utilization of power and toward philosophical rule, which they would want to adhere to the concepts of Stoicism (i.e. pursuit of virtue such as wisdom and pursuing the highest good). Their public opposition of these rulers meant that Stoicism was considered politically controversial, and its followers, these philosophers specifically, were persecuted. Its most prominent member was Thraesa Paetus, who Nero would also eventually have killed. As for Rubellius Plautus, he had “the honor” of being the first member of The Stoic Opposition that Nero executed.

We can gather that Plautus was a Stoic through third party accounts. Presumably in a letter to Nero, Tigellus, one of Nero’s guard and known for his cruelty, said, “Plautus again, with his great wealth, does not so much as affect a love of repose, but he flaunts before us his imitations of the old Romans, and assumes the self-consciousness of the Stoics along with a philosophy, which makes men restless, and eager for a busy life.” There are other accounts that support this claim.

Tacitus does write about Plautus in The Annals of Imperial Rome, but unfortunately there’s not much else to glean about Rubellius Plautus’s philosophy specifically. He has no written works (that have survived anyway), and what’s written about him does not highlight any unusual beliefs that break away from Stoicism or contribute something new to it. However, he was reviled by Nero, and their relation to history leaves us interesting dynamics to explore.

Rubellius Plautus was a distant cousin of Emperor Nero. Due to his parentage and membership of The Stoic Opposition, he was considered to be a possible rival to Nero’s throne. Nero didn’t act on the rumors of rivalry immediately, but grew increasingly suspicious of him over time. In 60 AD, a comet streaked through the sky, and some people took this as a sign that Nero’s reign would end and Plautus would replace him. These rumors reached Nero, and led to him exiling Plautus to Asia Minor, along with his family. Musonisus Rufus, a prominent Stoic philosopher and another member of The Stoic Opposition, would join him.

Two years into Rubellius Plautus’s exile, Tigellinus wrote again of Plautus to Nero, saying Plautus “had the arrogance of the Stoics, who breed sedition and intrigue.” It’s likely that Tigellinus stoked Nero’s fears of being usurped and turned him against more people than Nero otherwise might have soured against. Tigellinus became more powerful the more paranoid Nero became, so it benefitted him to continue stirring up that paranoia.

Beyond Tigellinus’s whispers, Nero also heard that Plautus was potentially plotting a rebellion with the general Gnaeus Domitius Corbulo. Nero, who had become more and more unstable and violent, ordered a centurion to assassinate Plautus in response.

It seems Plautus may have had some prior knowledge of Nero’s intent to have him killed, but Musonius told him to remain and face death rather than run away. Likely from a combination of courage and a hope that his family would be left alone if he did not resist, he did stay and face death, and was killed by the centurion during his daily routine exercise in 62 AD.

Plautus’s head was brought to Nero, who then ridiculed the appearance of Plautus’s apparently long and frightening nose. In 66 AD, Nero would execute Platus’s wife, children, and father-in-law. Plautus and his family were well-regarded, so their deaths were met with distress.

Sadly, Plautus was only one of Nero’s early victims. Nero’s reign of terror would continue, and other Stoics, such as Seneca, would be subjected to his brutality and orders of death.

Stand Up for Your Principles

Gaius Rubellius Plautus was born with a target on his back. He had parentage that made him a threat in the eyes of several people vying for or protecting their status (or their family’s status) in relation to the position of emperor. In terms of survivorship, it might have been smart for Plautus to retreat into the background, live a quiet life, and if not, always speak out in favor of Nero. Perhaps he would have been spared if he had never questioned Nero and his tactics.

But Plautus did no such thing. In fact, he fought for his Stoic beliefs, joined The Stoic Opposition, and loudly critiqued Nero’s heinous rule. Even if he had not had the parentage he did, his beliefs and actions would have painted him as a target for Nero. But his beliefs were important to him, and so he did not shy away from what he considered his moral duty.

How can you apply this to your modern life? Stand up for your principles even if you might receive scrutiny or scorn. Are your relatives making bigoted remarks? Rather than keep quiet to “keep the peace” remind yourself that they’re the ones not keeping the peace by making such remarks in the first place. Your response shouldn’t be “let’s not talk politics” or to laugh uncomfortably, or to stay silent. Your response should be in line with what you believe—bigotry is wrong. Call it out when you see it, even if it’s easier to keep your head down. The stakes are much lower in these types of scenarios versus what the Stoics faced—show some backbone.

Death Comes For Us All…Face it with Courage

Plautus knew death was literally coming for him—an agent of Nero’s was fast approaching to find and kill him in his exile. But he didn’t flee. He knew his time was coming. Fleeing would have been standing down, and likely fruitless anyway—he did not want a life running and hiding after he had stood up for his principles before. Furthermore, he likely thought that his family would be spared (though they unfortunately were not) if he acquiesced. Protecting others and his own courage were important to him, so he remained in dignity.

Memento mori—remember that you will die—is considered an important piece of Stoic philosophy. It helps Stoics live life to the fullest, to be virtuous and our best selves because death waits for no one. Some people take this and run with it in the wrong direction—they remember they will die and stew in it. Constant anxiety, trying to extend their lives at the cost of living truly.

We’re not suggesting not moving out of the way of an oncoming car or awaiting an assassin’s certain approach to make a point, but there’s something to Plautus’s decision we can learn from. To not live in fear of death, to not give up your dignity to try to hang on to one more day that you’re not guaranteed. Live by your morality.

An example of living this in more recent times is James Stockdale, a prisoner of war in Vietnam. He chose to endure harsh imprisonment and possible death rather than give in to his captors. He talks about it in his book, Thoughts of a Philosophical Fighter Pilot, which is a harrowing and inspiring read. Try to take these lessons from people like Plautus and Stockdale. Don’t let the fact that death is coming for you, for us all, get you anxious and give up what you believe in with only the hope that you’ll live another day.

Gaius Rubellius Plautus is often overlooked in the chronicles of history. But his rivalry with Nero, his beliefs, his membership in the Stoic Opposition, and his actions, are worth looking at and taking into consideration when we think about how we want to lead our own lives. 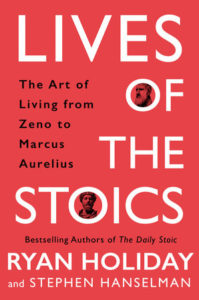