The 16 Greatest Lessons From 16 Years With Marcus Aurelius

Just over sixteen years ago, I bought Marcus Aurelius’ Meditations on Amazon. Amazon Prime didn’t exist then and to qualify for free shipping, I had to purchase a few other books at the same time. 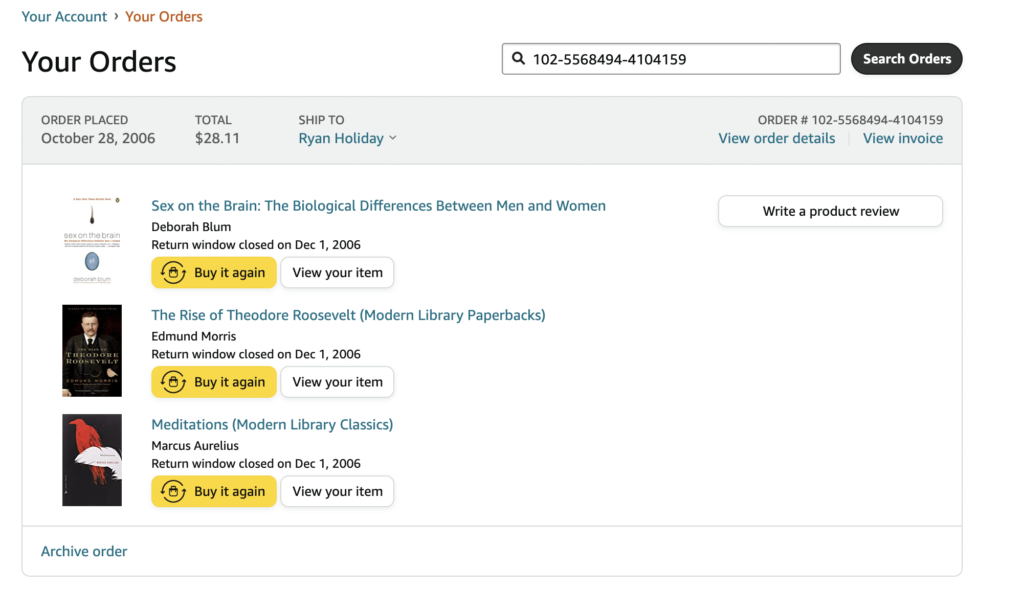 I was 19 years old. I didn’t know what Stoicism was. I didn’t know who Marcus Aurelius was (besides the old guy in Gladiator). I certainly didn’t know who Gregory Hays, the translator, was. I’m not even sure why I got that translation—it just came up first in the searches. But if I hadn’t ordered that book, if it hadn’t shown up at my college apartment a few days later, I’m not sure who I would have turned out to be.

It was for me what Tyler Cowen would call a “a quake book,” shaking everything I thought I knew about the world (however little that actually was at 19). I would also become what Stephen Marche has referred to as a “centireader,” reading Marcus Aurelius well over 100 times across multiple editions and copies.

In fact, just recently I started reading a new copy…because my 16-year-old copy was starting to get a little worse for wear. The cover has been taped back on. Nearly every page is marked with different pens and highlighters, nearly every page has been folded or unfolded at one time or another. 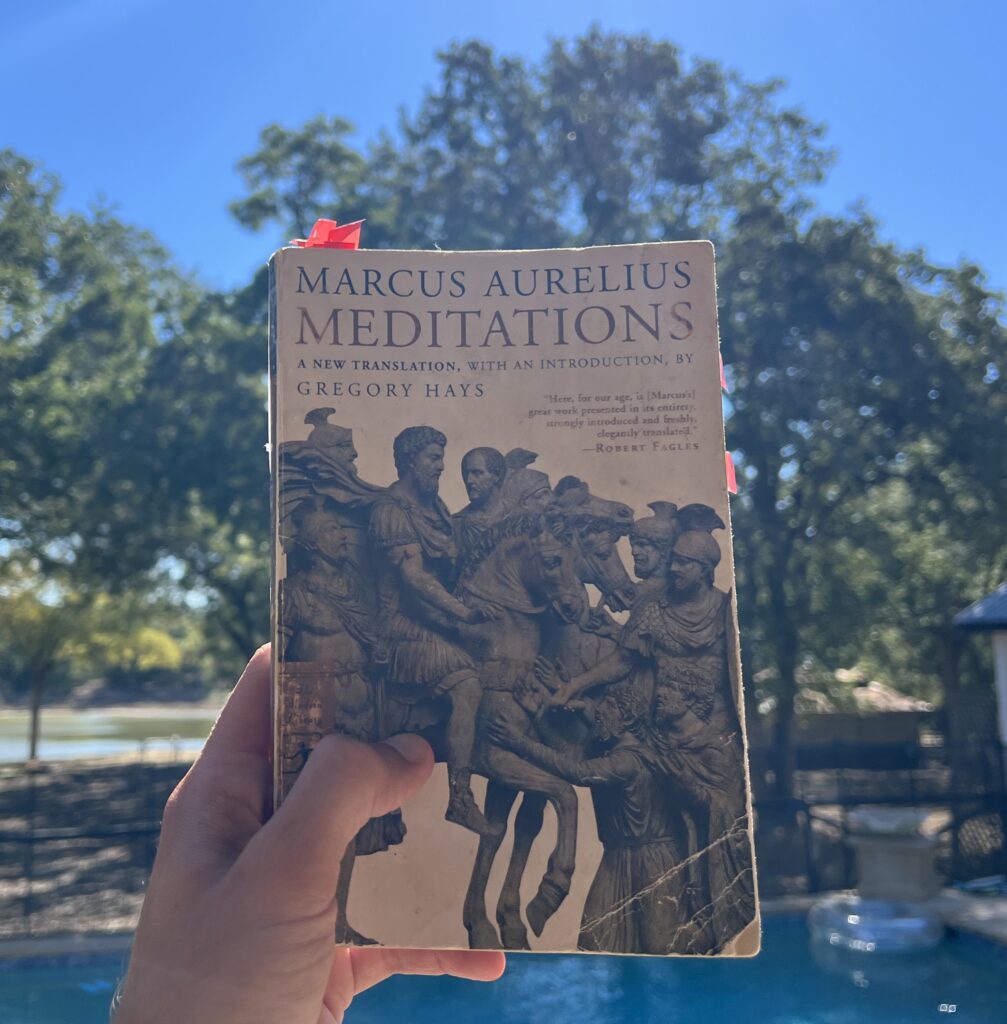 So I went out and created an edition with a level of quality not possible with mass produced books. First, I reached out to Gregory Hays, the translator of the Modern Library edition of Meditations, and bought the rights to my favorite translation. Then, I found the best Bible manufacturer in the United Kingdom and worked with them to produce editions with a gold foil-stamped cover, gilded-edge pages printed on premium-grade paper at their factory in London. I found a great designer to create custom illustrations to delineate each section. And finally, I found a packaging company to make a gold foil-stamped box for another layer of protection in preparation for this edition to stand the test of time, just like the content inside.

So with the release of this premium edition, I wanted to take the time to reflect on the 16 greatest lessons I’ve learned in over sixteen years with one of the greatest books ever created. 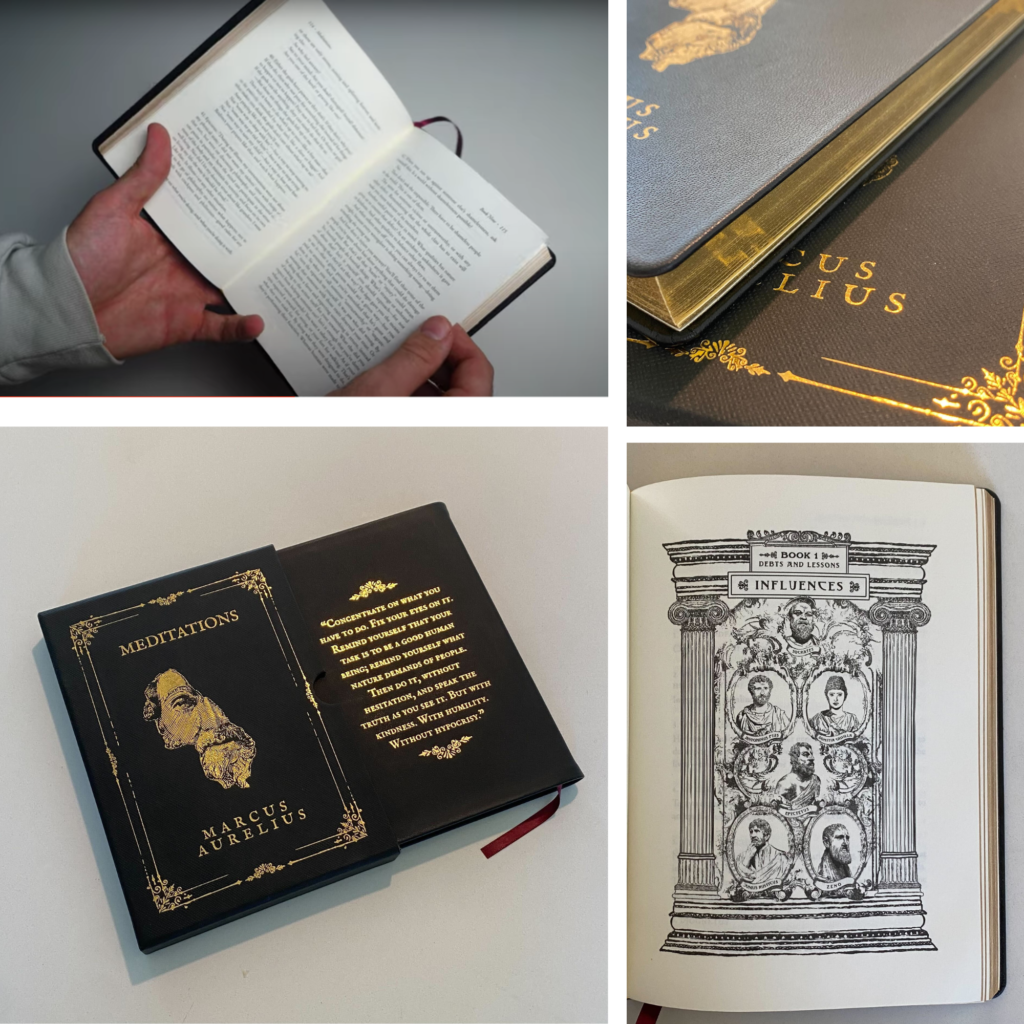 The 16 Greatest Lessons From 16 Years With Marcus Aurelius

1: In my first read of Meditations, I highlighted the line “It can ruin your life only if it ruins your character.” But COVID created a different way for me to see and understand what Marcus was writing about. When he talks about how there’s two kinds of plagues: the plague that can take your life and the plague that can destroy your character — he was talking about the things that we’re seeing in the world, that we saw on a daily basis over the last two years.

2: One of my favorite lines: “To accept without arrogance, to let it go with indifference.” Another translation of the same: “Receive without pride, let go without attachment.” Meaning: You are who you are, success or failure, admired or ignored.

3: In Book Five, I learned what philosophy really is. It’s not an “instructor,” as Marcus put it. It’s not the courses I was taking in school. It is medicine. It’s “a soothing ointment, a warm lotion.” It’s designed to help us deal with the difficulties of life—to heal, as Epicurus said, the suffering of man.

4: In the introduction of the Gregory Hays translation (my favorite translation and the translation we used in the leatherbound edition), I was first introduced to the distillation of Stoicism into three distinct disciplines (perception, action, will). It was this order that eventually shaped both The Obstacle is the Way and The Daily Stoic. When I get asked to explain the three disciplines, this is usually my short answer: See things for what they are. Do what we can. Endure and bear what we must.

5: Marcus writes, “Go straight to the seat of intelligence,” and, “Mastery of reading and writing requires a master. Still, more so life.” I wrote “RG” in the margins of my original copy. RG stands for Robert Greene—who was and is my master in writing and, more so, in life.

6: From Marcus I learned who Heraclitus was (Marcus quotes him a lot). “No man steps in the same river twice,” is one of the lines he quotes. Even on my sixteen year journey, I still get something new out of Meditations each time I pick it up.

7: On what I would guess is my third or fourth read, I marked this passage: “You could leave life right now. Let that determine what you do and say and think.” Since then, I’ve tried to think about death at least a couple times a day. Memento Mori.

8: At some point after I read the Hays translation, I picked up another translation of Marcus—one that was also free online. I was immediately struck by how the beautiful, lyrical book I loved had become dense and unreadable. It struck me that if I had cheapened out and tried to get for free what I’d bought instead, my entire life might have turned out differently. Books are investments. Be glad to put in your money.

9: Marcus has a wonderful phrase for the approval and cheering of other people. He calls it “the clacking of tongues”—that’s all public praise is, he says. Anyone that works in the public eye, who puts their work out there, should keep this phrase constantly in mind.

10: “The student as a boxer, not a fencer.” Why? Because the fencer has a weapon they must pick up. A boxer’s weapons are a part of him, he and the weapon are one. Same goes for knowledge, philosophy and wisdom.

11: “It stares you right in the face,” Marcus writes. “No role is so well suited to philosophy as the one you happen to be in right now.” Was he referring specifically to the role of emperor? Did he mean that any and every role is the perfect one for philosophy? I prefer to think it is the latter.

12: It’s funny to think that his writings may be as special as they are because they were never intended to be read by us. Almost every other piece of literature is a kind of performance—it’s made for the audience. Meditations isn’t. In fact, their original title (Ta eis heauton) roughly translates as To Himself. That’s why the tagline on my site is, “Meditations on Strategy and Life”—I’m largely writing to and for myself.

13: A great rhetorical exercise from Marcus goes essentially like this: “Is a world without shameless people possible? No. So this person you’ve just met is one of them. Get over it.” It’s something I try to remind myself every time I meet someone who frustrates or bothers me.

14: One of the most practical things I’ve learned from the Stoics is an exercise I’ve come to call “contemptuous expressions”. I love how Marcus would take fancy things and describe them in almost cynical, dismissive language—“seeing roasted meat and other dishes in front of you and suddenly realizing: This is a dead fish. A dead bird. A dead pig.” He even describes the Emperor’s purple cloak as just a piece of fabric dyed with shellfish blood. The aim was to see these things as they really are, to “strip away the legend that encrusts them.” When I interviewed Robert Greene for Daily Stoic, I was surprised to hear he also loved this passage. As he explained to me: “I’ve tried to bring that across in my writing. For instance, to deconstruct things like power and seduction and to see the actual elements in play instead of the legends surrounding them.”

15: It was in reading Pierre Hadot’s excellent book The Inner Citadel that I first got an explicit explanation of a Stoic exercise he calls “turning obstacles upside down.” I’d read the original passage in Meditations, but Hadot’s translation was different, it made it clearer. The original title of my book was “Turning Obstacles Upside Down.” It was only in reading The Dictionary of Modern Proverbs that I found the Zen saying, “The obstacle is the path” that I was able to combine it all and come up with the book. This is why I’m an advocate of swarming topics, surrounding it from all angles.

16: I was lucky enough to interview Gregory Hays in 2007. I asked him what his favorite passage was. He quoted: “Keep in mind how fast things pass by and are gone–those that are now and those to come. Existence flows past us like a river: the ‘what’ is in constant flux, the ‘why’ has a thousand variations. Nothing is stable, not even what’s right here. The infinity of past and future gapes before us—a chasm whose depths we cannot see.” I have to admit I missed the brilliance of that one the first time, but it’s stuck with me ever since.

To learn more and to pick up your own copy of this beautiful new edition of Meditations, visit dailystoic.com/meditations.

By: Ryan Holiday is a bestselling author of The Obstacle is the Way, Ego is the Enemy and Stillness is the Key. His latest book, Discipline is Destiny, is the second in his Stoic Virtues Series and can be purchased at the Daily Stoic Store.