Keep This Always At Hand

It’s easy to nod along with a book (or even this email) when you’re reading it. Or to double-tap the like button when you see an inspiring Instagram post.

But how long does this stay with you? How quickly will its message flutter away? It’s a critical problem for all of us out there who are trying to get better. Who are trying to actually live the principles of philosophy, and to rely on it in life’s stressful moments, as well as life’s ordinary hours.

Stoicism as a philosophy was made to be kept in hand, always at the ready. Even the title of Epictetus’s Enchiridion (hand book) shows this. As A.A. Long writes in his recent translation of Epictetus for the Princeton University Press:

In its earliest usage Enchiridion refers to a hand-knife or dagger. Arrian may have wished to suggest that connotation of the work’s defensive or protective function. It fits his admonition at the beginning and end of the text to keep Epictetus’s message “to hand” (procheiron).

That really tells you something about this philosophy, doesn’t it? That it’s not just a book, it’s not just handy; it’s designed to become almost like an extension of ourselves. To protect and serve us in each day’s tests.

When it comes to memento mori (“remember you will die”), different generations have attempted to keep this idea at hand in different ways. The result can be seen across generations of writing, art, music, jewelry and ritual.

Roman generals employed aides to remind them of this fact at their moments of greatest triumph. Philosophers have kept skulls on their desks for millennia. In early Buddhist texts, a prominent term is maraṇasati, which translates as “remember death.” Some Sufis have been called the “people of the graves” because of their practice of frequenting graveyards to ponder on death and one’s mortality. In Renaissance Europe, memento mori prayer beads were a popular way to keep death in mind. Famous artists from Rembrandt to Damien Hirst have added to the memento mori genre, centuries apart from each other. Beneath the church of Santa Maria della Concezione dei Cappuccini in Rome, there is a crypt built in 1630, decorated with the remains of 4,000 friars. In the middle, there is a plaque inscribed in three different languages that states, “What you are now, we once were; what we are now, you shall be.”

They all were trying to remember: We can go at any moment.

While times change and it may no longer be practical to keep an aide to whisper death in your ear, the benefits of memento mori remain.

That’s why we’re excited to announce our newest addition to the rich history of memento mori: the Memento Mori Signet Ring. 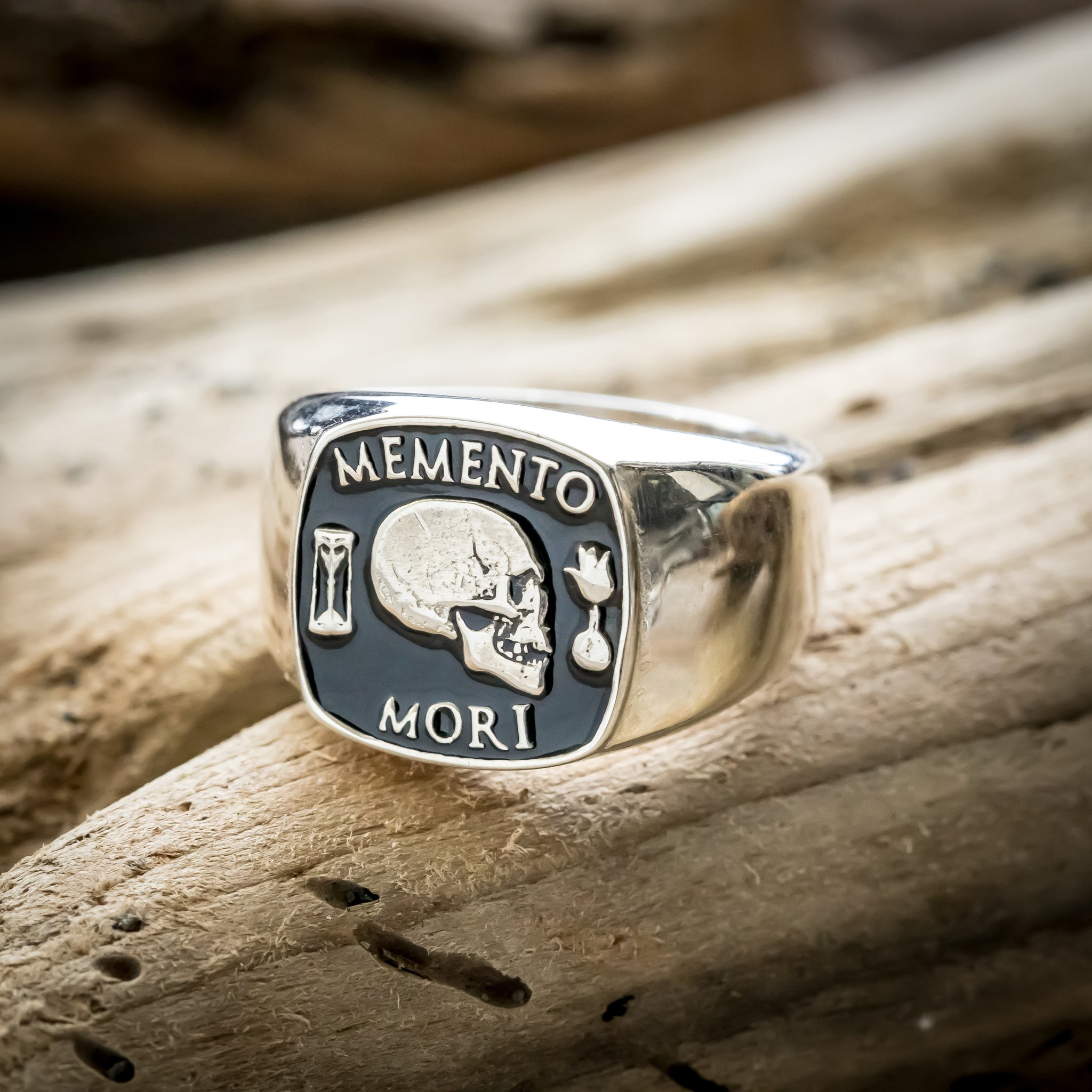 The signet ring as a piece of jewelry can be dated back almost 6,000 years to ancient Mesopotamia, ancient Egypt and ancient Nubia. The Bible even includes a story of Joseph receiving a signet ring from the Egyptian Pharaoh. It can also be traced back to the earliest days of Rome.

The signet ring was a practical component of Roman life. A man’s ring was engraved with the family crest and was used to seal and sign important documents when pressed into wax.

We can imagine Marcus Aurelius, Seneca, Cato, Cicero and Epictetus all wearing their rings. In the following centuries, their tradition was followed by thousands of powerful soldiers, philosophers and kings. In the Middle Ages, King Edward II of England even went as far as declaring that all official documents must be signed with the King’s signet ring. For this reason, most signet rings were destroyed when their owner died. This eliminated the possibility of forgery.

Charlemagne, the great Carolingian monarch known for uniting most of Europe, wore a signet ring with the head of Marcus Aurelius engraved upon it. To remind himself of the former Roman Emperor’s great qualities. 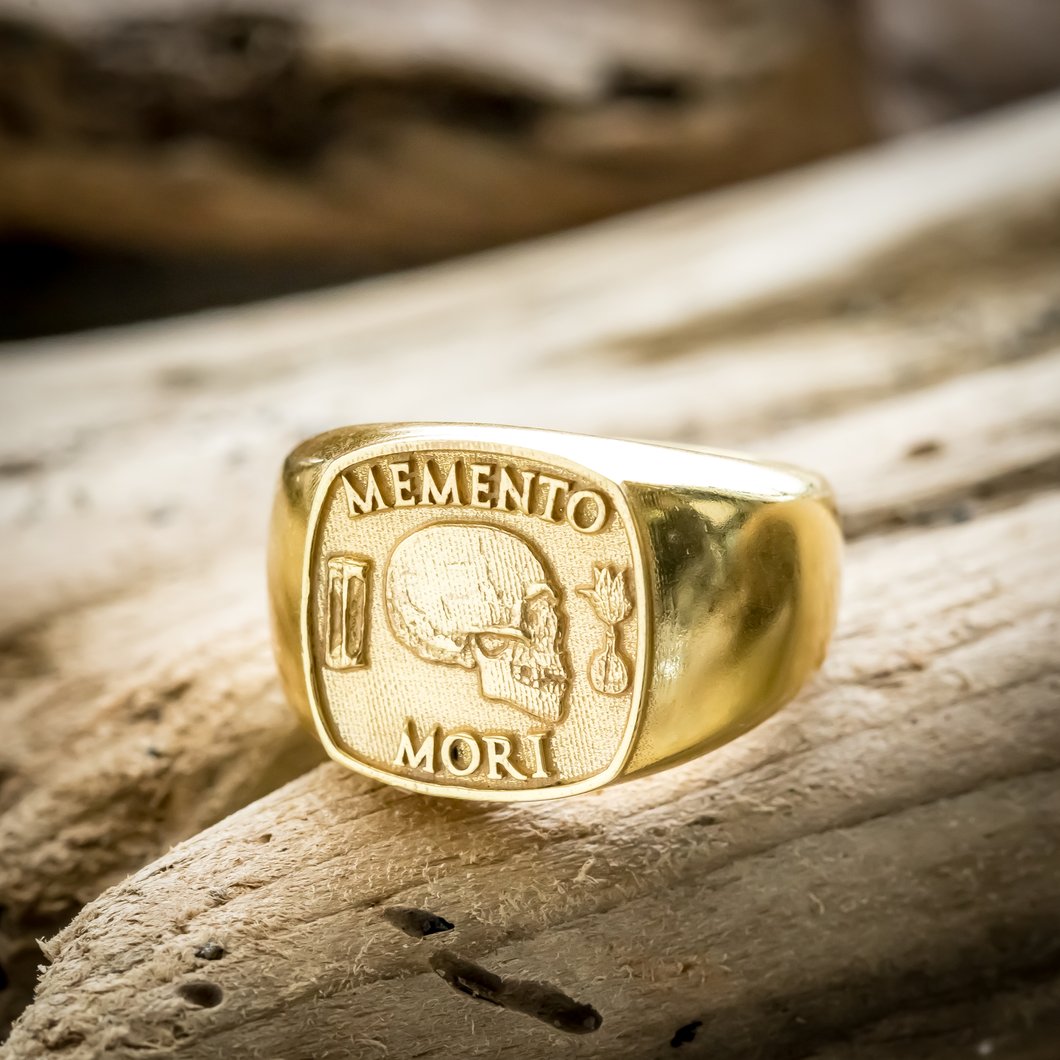 Today, signet rings are used to help remind the wearer of an important symbol or message. That’s exactly what our memento mori signet ring is about—a physical reminder of one of history and philosophy’s most powerful practices: meditating on our mortality.

The Daily Stoic signet ring is inspired by the French painter Philippe de Champaign’s famous painting “Still Life with a Skull,” which showed the three essentials of existence: the tulip (life), the skull (death), and the hourglass (time). 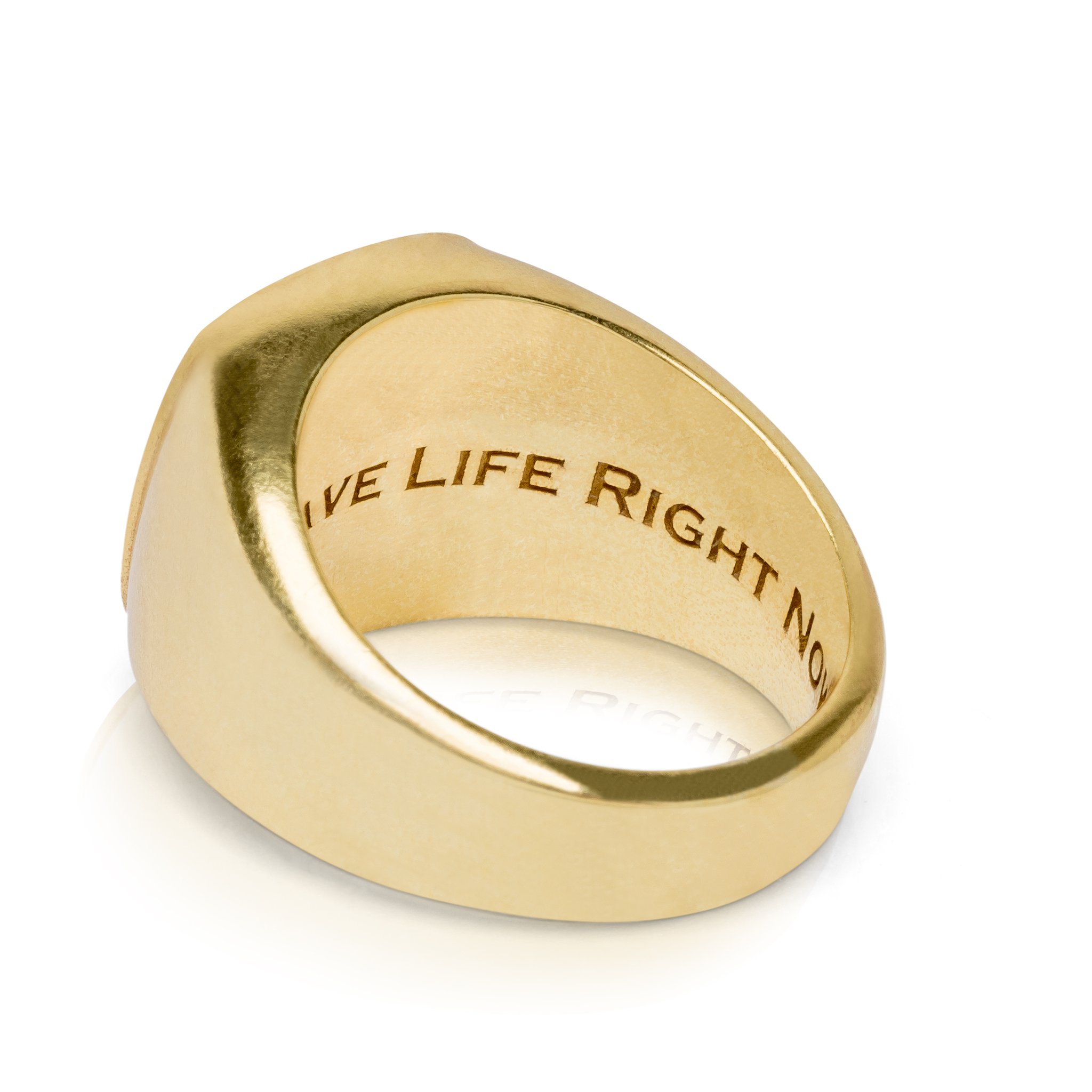 The inside shows Marcus Aurelius’s timeless words: “You could leave life right now…” What’s left to the wearer is to repeat to themselves the final half of his quote: “…Let that determine what you do and say and think.” We must live NOW, while there is still time.

These rings were designed by Daily Stoic. Each one is individually handcrafted in Los Angeles using pure sterling silver or plated with 14-karat gold. The ring comes in a custom memento mori box made for Daily Stoic. The box is embossed with the the three essentials of existence – the tulip (life), the skull (death), and the hourglass (time). The ring itself is held by a velvet ring box inside the memento mori box. Each ring comes with an accompanying information card that explains the history of memento mori. All together, the package makes a great gift even to those unfamiliar with the practice.