What We Can Fully Control.

As a sentient being, I know that I can control my thoughts. From this I can deduct that as my actions are controlled by my mind, I, therefore, must be able to control my actions.

While I completely reject that everything is predestined, I do think that the world is causational: what came before affects what is happening now, and the things that happen now affect what will happen later. Everything is the sum of its causes and everything has a cause.

“I have noticed even people who claim everything is predestined, and that we can do nothing to change it, look before they cross the road.” Stephen Hawkings

Of course, I am eliminating from this discussion on what we can fully control the instinctual reactions one may have to external events, such as pulling your hand back from a flame, turning your head away from an incoming punch, or (perhaps) looking at an attractive person as they walk past. These mechanisms often completely skip the conscious part of our brain to increase the speed at which they happen.

Note the distinction between controlling one’s actions and controlling one’s body. You cannot fully control your body. You cannot stop yourself sweating, digesting the food you have eaten or bleeding when you are cut. You can, by making the choices in your diet and exercise regime, lose fat and gain muscle but that amount to only partial control of your body. We will discuss the interesting topic of partial control a little later on.

So let’s do it, let’s ask this question and see where it leads us. I’ll break it down into two parts, our thoughts and our actions.

Can Someone Control Your Thoughts?

The answer here is a definite no. If you are not careful, you can let others influence the way you think. An obvious example of this is with advertising. An advertising agency only needs to make you see the same advert less than a dozen times for it to have some effect. It is estimated that the average person is bombarded with around 250 direct adverts per day (such as internet and tv advertising and billboards) and up to 3000 visual attacks (such as labels on clothing, etc).

In contrast with the claim I made earlier about advertisers only needing less than a dozen messages to influence us, it may appear that we have no chance to stop ourselves being influenced by advertising. One would be correct in making this assumption, if it wasn’t for the fact that we have between 12,000 to 60,000 thoughts per day (depending on how “deep” a person you are) and so consequently there is plenty of room to fight off the effects of advertising. In fact, nobody stands a chance of trying to control or even just influence your thoughts if you are a deep analytical thinker.

On top of that, one can simply stop watching TV and install software such as Adblock Plus to block all internet advertisements. I’m not going to go into a discussion about hypnotism because I don’t know enough about it but it’s safe to say that you are probably going to be aware if someone is trying to hypnotize you (!).

Can Someone Control Your Actions?

The second point is especially interesting to us. Considering the earlier claim that we can control our thoughts, this means that we can control whether we hold much value to our lives or material wealth and so nobody can force us to do anything by threatening to take something away or to give us something more. Once you stop holding on to anything, you are truly free.

“It’s not what happens to you, but how you react to it that matters.” Epictetus

What We Cannot Control

What about that are outside of the self? Well, there are obviously plenty of things which one has absolutely no control over. No amount of willpower will stop the earth rotating on its axis or the sun’s light reaching the earth.

Obviously everybody has some influence on external events at some level, otherwise, it would not make any difference if someone existed or not. The problem is that the influence we exert on external events is not controllable by us. The case in point is that nobody can accurately predict the future consistently because they cannot fully control the events of the present.

That’s why it’s quite laughable that governments have whole departments dedicated to predicting commodity prices in 25 year’s time: they cannot even tell you what the price will be tomorrow! So that makes, there are plenty of things which we cannot control, but surely we can control some things, even if only partially? On one hand, William B. Irvine in his book A Guide to the Good Life: The Ancient Art of Stoic Joy argues that some things are partially under our control. On the other hand, the ancient Greek philosopher Epictetus argues that partial control is no control.

Well, they cannot both be right…right?

Let’s just take a step back and analyze the ways in which we can subdivide the different types of control.

The first way, the dichotomy of control (by the way, a dichotomy is any splitting of a whole into exactly two non-overlapping parts) claims that everything is split into two categories:

As we saw above, this is perfectly logical but perhaps ignores the fact that there may well be things in which are partially under our control, like our bodies. This is where the second way, the trichotomy of control comes in. The viewpoint, which I expressed in my essay “How to Carpe Diem”, tells us that everything falls into three categories:

We’ve covered one and three before, so what about point number two? Irvine gives the example of a tennis match to illustrate his point about partial control. You cannot fully control the outcome, but you can at least influence it by how well you play. He includes the follow diagram to shed light on his modification: 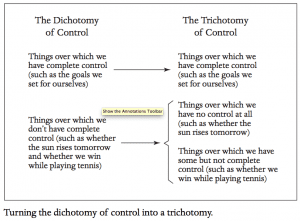 Now I want to show you how this modification is actually incorrect, but it doesn’t mean Irvine is completely wrong, it just means he was holding the wrong end of the stick.

The problem with Irvine’s thinking is that he doesn’t break down the act of playing a tennis match into its fundamental building blocks. If he had done this, he might have realised that the tennis match is made up of many different parts, some of which are fully under our control and some which are fully out of our control. This leads to the overall illusion, when viewed on a grander scale, that we have partial control of the outcome, but that just cannot be. If you don’t have full control over each and every part of the whole, you cannot possibly have complete control over the whole.

Saying that you have partial control over the outcome of the tennis match is a bit like saying an aeroplane pilot who controls of the thrust of the engines but not pitch (the up and down movement of an aeroplane) has partial control of the flight path of the aeroplane. Well, let me put it this way: I for one wouldn’t want to be a passenger on that aeroplane!

If we assume that Irvine’s “partial control” is not in relation to the outcome of the match, but to the match itself, then he is right. We have control of some aspects of the tennis match, but not others. You may have full control in how you play, but you cannot have full control of how your opponent plays or the decisions made by the umpire, and those may very well turn out be the defining factors which affect the result of the tennis match.

What is clear, is that we have no control over the outcome.

I still think I can win…

I know what you’re thinking. This is all good in theory, but one does have control of the outcome of a tennis match.

Let’s try and apply this to a hypothetical real-world scenario. If I go head to head with the top-seeded professional tennis player in the world, I stand a close-to-zero chance of winning the match. I say close-to-zero because there is a small likelihood that he might injure himself badly enough to forfeit the match, but I will not beat my opponent with my skill.

In this case, it’s quite tempting to say that the professional has full control of the match but on closer inspection, it’s quite obvious that it’s the same game as before. He can only control his thoughts and actions, and I can only control mine. It just happens that he is the far better player and so his actions give him a large edge against me but he still does not control the outcome.

Think of it like this: it’s my lack of skill that virtually ensures him the win, not his level of skill.

The point being that if I pitch this top-ranked tennis player against the next best opponent, there is far slimmer chance of him winning than when he was playing me. Nobody would say that this second match is a guaranteed result, yet the only thing that has changed is the opponent, he is still the same person.

Why Bother Leaving the House?

Now if pretty much everything outside of ourselves is completely out of control, why bother doing anything? Why bother leaving the house? Why bother even getting up in the mornings? We might as well just give up and not do anything with our lives.

This is a logical conclusion to draw from all the above if, one carries on thinking about everything in the traditional manner. By switching your thinking from “I want to win this tennis match” to “I want to play to the best of my abilities” you suddenly give yourself a reason for doing things. Doing your best is within your capabilities and so you might as well leave the house in the morning to go and play the tennis match.

Don’t do things because you think you can control the outcome, focus on the doing instead. Do as well as you can, and then the results may come, fate permitting. There are no guaranteed results, no matter how hard you work.

So it boils down to trying to be the best person you can be, and seeing as you can only control your thoughts and actions, you might as well focus all your energies on that and ignore everything else that is out of your control.

Focus on the process, not the results. You may just surprise yourself with how well you do in your life.